Not so Common Gull 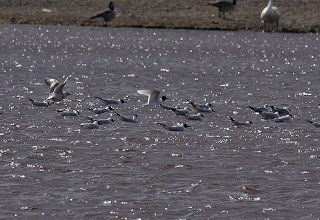 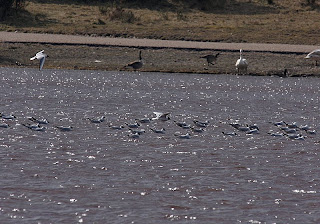 Albert village lake is the Leicestershire version of Stubbers Green near Walsall, West Mids. A good place to watch gulls as these pre-roost sites are relatively small bodys of water compared to the main roosts at Foremark and Chasewater reservoirs respectively. I'd never been to Albert village and when news of a possible Mew gull there broke I didnt feel the need to charge off. It was Dave Gray's enthusiastic report and photos on his blog which finally got my backside into gear. The lake was very easy get to on the A444 but having waited until the weekend I knew I'd reduced my chances of seeing the bird whatever it was, as the tip wouldn't be working at full tilt if at all, so that Gulls wouldn't follow their normal behaviour pattern. I joined a mixture of Gull enthusiasts, local birders, insurance listers and those who were simply curious. Unfortunately, the bird was only seen briefly mid-morning and did not reappear by late afternoon. I also missed a Kittiwake which had been present in the morning. An adult Mediterranean Gull did put in an appearance though.
Posted by bob duckhouse at 12:43