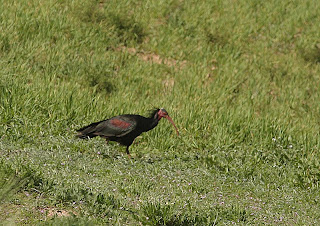 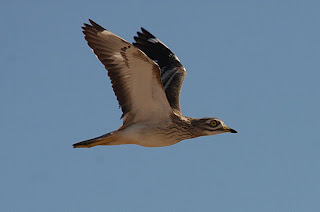 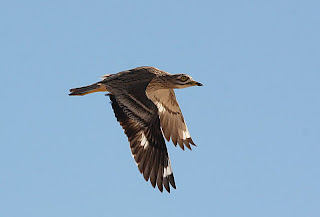 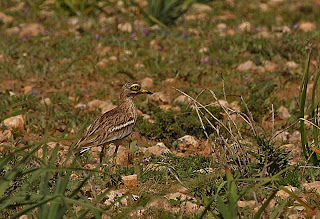 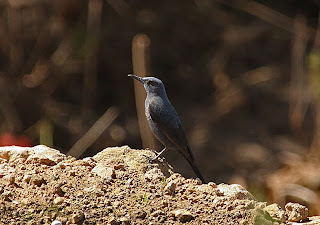 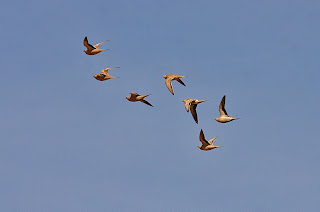 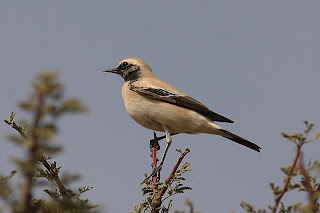 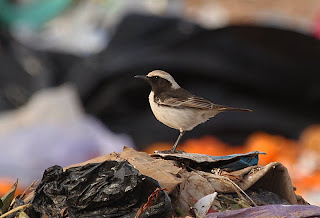 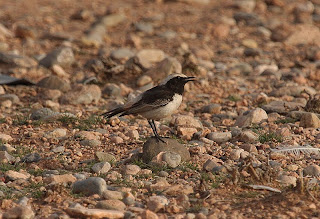 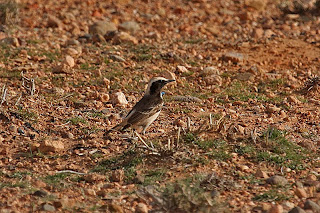 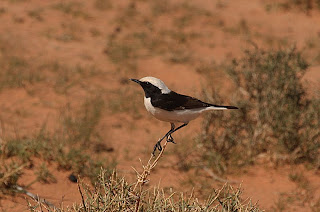 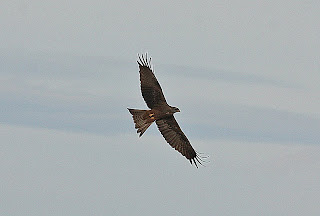 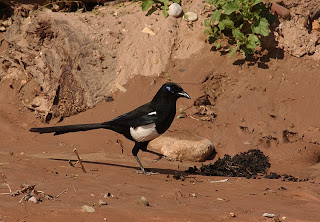 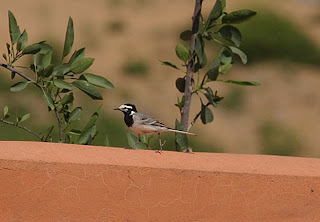 'Moroccan' White Wagtail
Day 6
We left our desert retreat and headed south. We explored several likely spots on route and found Spotted Sandgrouse c60, Mourning Wheatear, Scrub warbler and Quail. We even found some water in the stoney terrain where we stopped for lunch. Yes lunch. There was even a change of menu. Instead of Sardines, bread, cheese, Yoghurt and fruit we had Tuna, bread, cheese, Yoghurt and fruit - but the scenery was nice. The birding wasn't bad either 2 lifers in fact: Temminck's Lark and Red rumped Wheatear. We had also noted the almost continual stream of Black Kites moving north towards the Staits of Gibraltar. Our next stop was the famous Tagdilt track. We spread out to cover as much ground as possible. I was lucky to find an African Desert Warbler, much to everyones relief and Dave, Jan, Brian and Chris were rewarded for their Marathon hike with views of another sought after species, Thick billed Lark. Other birds in the area included: Black Kite c200, Long legged Buzzard, White Stork and Stone Curlew.
I cant remember much about the Hotel except that many of the beds were in an elevated position, several feet off the ground in fact. Whether this was something to do with the local wildlife, the plumbing or an ancient sexual ritual we never did find out.
Day 7
Most of the day was spent driving to Agadir. We did some birdwatching at a couple of likely areas on route along the Sous valley. Moussiers Redstart were becoming more numerous and other roadside birds included Great spotted Cuckoo, Woodchat shrike, Thekla lark and Laughing doves around the villages. The towns were chaotic, busy with street traders, handcarts, donkey's, bicycles, trucks full to bursting with people and goods.
In Agadir we checked in to a modern tourist Hotel where we were to stay for 3 nights. Luxury indeed. Everything worked. Outstanding.
Day 8
After a substantial breakfast the group travelled north to the town of Tamri. At about 60k we stopped at CapVir for a spot of sea watching. Apart from Gannets there weren't many birds but we did log Pomerine Skua, Balearic Shearwater and a Manx Shearwater well south of its normal range.
Just north of Tamri, Peter brought the bus to a sudden halt having spotted a small group of Bald Ibis in cliff top fields not far from the road. We watched these strange and endangered birds for some time as they fed quietly in front of us. Having connected with our target bird so quickly we had more time to explore the Sous estuary. During lunch we had chance to look at the distinctive Moroccan races of White wagtail and Magpie. As the river ebbed we could watch a good number of species on the pools and mudflats of the estuary. Waders were well represented with : Kentish plover, Ringed plover, Grey plover, Redshank, Spotted Redshank, Greenshank, Bar tailed Godwit, Black tailed Godwit, Sanderling, Avocet, Green Sandpiper, Common Sandpiper, Knot, Ruff and Dunlin. Other species included Osprey, Greater Flamingo, Slender billed Gull, Mediterranean Gull, Audouin's Gull, Spoonbill, Grey Heron, Sandwich tern, White Stork, Great White Egret, Little Egret and Barbary Partridge. As the sun began to fall it was time to take up positions for our target bird of the evening Red necked Nightjar. Only trouble was a Golf course was in the process of construction right where the old road had been. Despite our best efforts in negotiating safe passage the jobsworth played the old 'elf and safety card. If you were riding a Camel without a hard hat you were OK but if you resembled a birdwatcher you'd got no chance. The driver drove around the Golf course to somewhere near where we needed to be, but the hassle had only just started. The Red necked Nightjar site just happened to be next to another Royal Palace. Several guards, police, security ect. came to check us out. No problairmo. We smiled, and flapped our arms they smiled and flapped their arms everyone was happy. That was
until the scuffy squaddy with a grudge turned up equipped with radio, mobile and tranny. He had so much gear his rifle dragged on the ground behind him. He gesticulated violently, I think thats what you call it. Ignore him suggested our leader. We lifted our bins towards the orange dusk skies. The soldier became more frenzied and made calls to his superiors. More gestures but no response from the beligerant birders. Finally he said 10 minutes and wandered off never to be seen again. A bit like the Nightjar which settled on the track for a nano-second before disappearing into the darkness. Nice dinner though.
Posted by bob duckhouse at 08:46