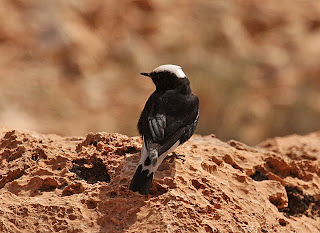 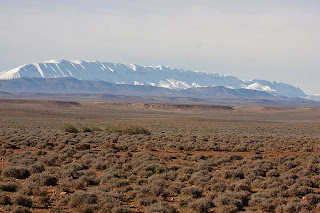 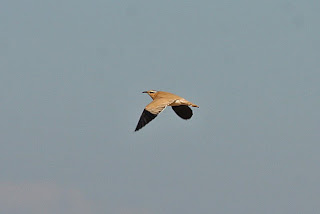 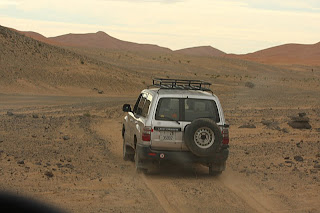 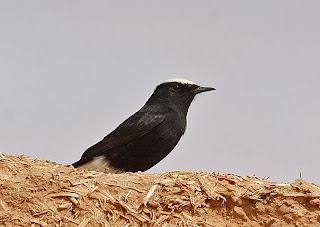 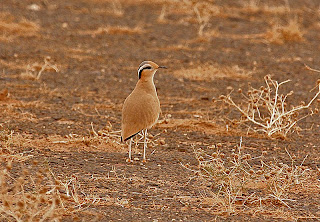 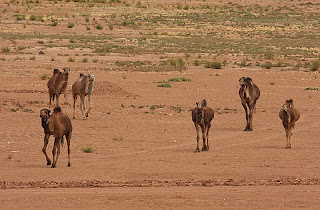 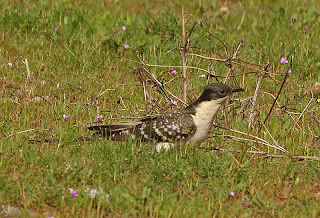 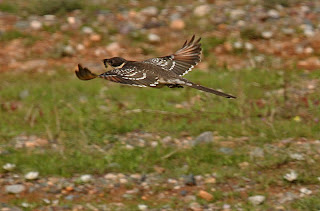 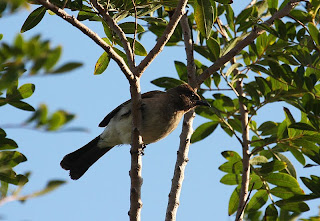 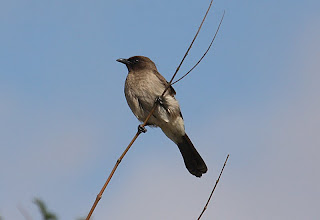 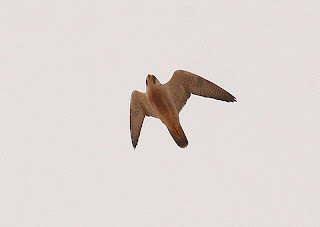 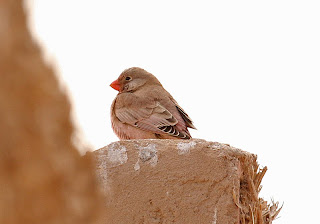 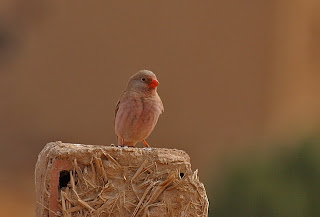 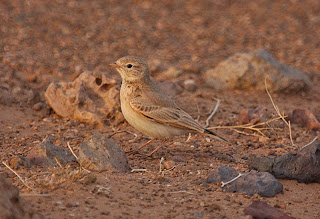 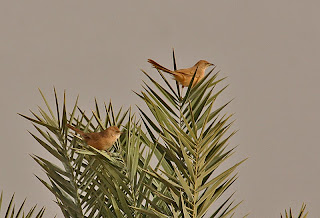 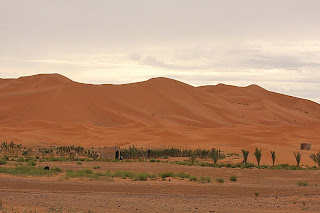 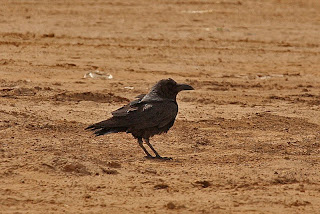 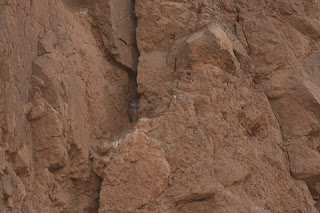 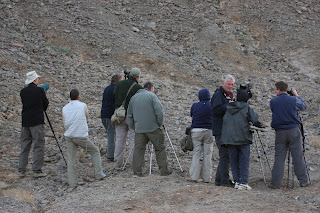 Ryn discusses the Moroccan economy with a local

Day 4
A relatively short drive from the hotel to Zeida plain for an early morning search for our target bird, Dupont's Lark. Peter had prepared us by saying our chances of seeing this elusive species was only 50/50. He hadn't allowed for Jan's sharp eyes though, and in the event the bird showed very well. We also had flight views of Black bellied Sandgrouse and distant Black Kite. On route we had excellent views of Lesser Kestrel before stopping at a small gorge for lunch in the sun. It was Cheese and Sardine sandwiches again but it tasted better in the sun with White crowned Black Wheatears sharing the rocks with us and Crag Martins flying around. As we left the mountains we drove through a stoney semi desert landscape as we approached the fringes of the Sahara. Our hotel near Erfoud was completely isolated in flat and apparently barren terrain. However, the bus was soon brought to a halt as we spotted a large lark near the track. Hoopoe lark was a new bird for most on board but we didnt stop long as the species was on the itinerary for the next day. We dumped our kit at the hotel and went out straight away to explore the surrounding area on foot. We found Northern Wheatear, Lesser Short toed Lark, Desert Lark, Bar tailed Desert Lark, Dartford and Spectacled warblers but no sign of African Desert warbler despite extensive searching.
The hotel was interesting, the rooms were comfortable enough but the plumbing left a good deal to be desired. Attempts to fix the leaking toilet in our room failed miserably and efforts at getting a shower were soon abandoned. The evening meal of Beef with Apple was very enjoyable.
Day 5
We started the day with another fruitless search for Desert warbler but the walk provided one of the most memorable sights of the trip. In the soft early morning light and stillness of the desert the sight and sound of Hoopoe Larks displaying with their cart-wheeling flights was amazing. We returned to the hotel and got into Land cruisers, our Desert transport for the day. It wasnt long before we were stopping to admire Cream coloured Coursers and Desert Wheatears on route to Erg Chebbi with its magnificent Sand dunes. We searched a variety of mud built buildings and cafes as well as deserted Camel compound looking for Desert Sparrows, one of the must-see birds of the area but we were out of luck. A number of desert species were seen though including: Barbary falcon, Trumpeter finch, Tristram's warbler, Sub-alpine warbler and Brown necked Raven.
As the day wore on it became apparent that not only was there no Desert sparrow or Desert warbler there was also no Desert lunch. This was a serious oversight as I was beginning to hallucinate. Images of huge Melton Mowbray pork pies appeared in the distance, shimmering in the midday heat haze, but always just out of reach. We drove on to Merzouga where we found Fulvous Babbler without too much difficulty but it was a little annoying to find out later that there were also Desert sparrows in the town if we'd know the site.
Our next target was Pharoah Eagle Owl. During our wait at the site we were entertained by rock/fossil sellers who although persistent were good humoured enough. We were also 'entertained' by a Bonelli's Eagle which soared majestically above the cliff. Eventually the Eagle Owl appeared in a crevice before we set off back for our second night at the Desert hotel where we were certainly ready for our meal of Chicken with potatoes filled with cheese.
Posted by bob duckhouse at 00:52