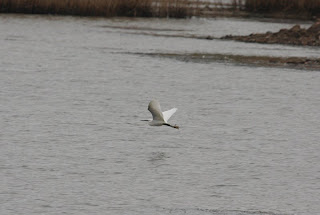 Monday 23rd February 2009
Started out at my favourite railway bridge near Whitacre Heath. I needed Curlew for my County yearlist and 4 had been reported there over the weekend. I was, however, surprised to see 8 Curlew (116) there, as well as 2 Oystercatchers (117) and the regular Little Egret. The canal walk from Broomey Croft produced 2 Little Egrets at Fishers Mill with yet 2 more at Drayton Bassett. Yes, I had strayed over the County boundary into Staffs. but by the time I realised, it was too late. Only time will tell what fiendish fate awaits. Anyway, the upshot was 3 Redshanks and 2 Ringed Plover. I met the everpresent John Harris but just as we started to look at the Gulls some delinquent on a toy motor bike came hurtling into view and put everything up. John waited for the Gulls to settle but I'd had enough of Staffs birding for one day and headed back. I paused for an hour or so at Richards meadow. No Owls but I was joined by Wally who kindly showed me some of the slides he'd taken in the C19 rephotographed on his new digital camera - too dam clever for me.
The wind got up and I was feeling distinctly cold. I took my leave and with the prospect of Curry and double Corrie to look foward to made my way home.
Posted by bob duckhouse at 11:21