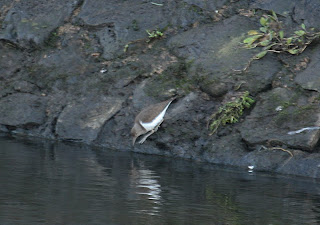 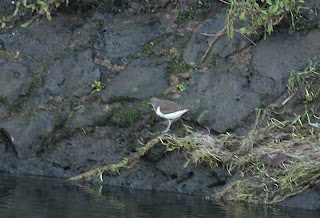 Sunday 3rd January 2010
First stop was the recycling centre at Grendon in an attempt to try and clear a bit of the accumulated rubbish from the loft; assorted rolls of wallpaper, ex plastic Xmas trees, a large bag of female shoes and a variety of cuddly toys. I realised I was chucking out a good deal of what the car boot enthusiasts might call stock but I really cant waste my time argueing about whether a slightly soiled Darth Vader is worth 50p or 75p. To me it was rubbish, but I did make sure the shoes were placed in the appropriate container and so may be some use to someone. So with domestic duties complete, time for a bit of birding. The nearest site being Alvecote I had a mouch around and was delighted to find a Jack Snipe as well as a number of Common Snipe and a Stonechat. Birchmoor was a bit of a wasteland with all the whole area covered with Winter Wheat, the only birds seen c 60 Golden Plover, a Great spotted Woodpecker and a Song Thrush. I moved on to Hams Hall and was rewarded with 2 Common Sandpipers along the river, a single Chiffchaff, a few Bullfinch and a Green Woodpecker.
Posted by bob duckhouse at 09:16