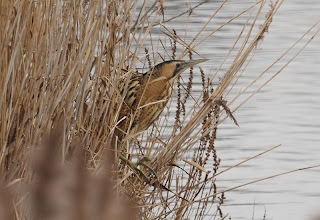 What do all the images I took at Ladywalk Nature Reserve the other day have in common ? None of the birds are feeding- the berries have all gone, theres little or no ice free water to fish in theres no damp edges for the Water Rail to poke about in. Add this to the Kestrel trying to catch Pied wagtails in a supermaket car-park and you can assume times are hard for many birds. The feeding stations at Ladywalk were doing a roaring trade with a large number of species benefitting from the efforts of Steve Cawthray but not all species are as lucky. The unusually prolonged freeze up has created a layer of 'permafrost' covered by a layer of snow which stops many species except those with quite long bills feeding on invertebrates in the leaf litter. For many ground feeding species seeds are covered by the carpet of snow and many are forced to eat tree buds as an alternative. Snow also hides rodents from Owls and Raptors. Having built up healthy numbers of Barn Owls, this winter could have devastating effects on the Barn Owl population in the Tame valley for example. Species that rely on water to feed will also struggle, Kingfishers and Bitterns may well perish if the freeze up lasts much longer either through starvation or increased predation from equally desperate predator species. Some may be forced to move to running water if they can find it but risk becoming more exposed. I fear that Cetti's warblers which were beginning to establish themselves in the Tame valley may again become a rare sound in Warwickshire.
OK, we've had hard winters before and species survive in time but the problem is that this time populations of many resident species are so low through a variety of reasons that they may never recover winter losses. Sorry its a bit doom and gloom but having gone on in the past about the scarcity of many 'farmland' species in the past I think that while there may always be vagrants to twitch, the bread and butter birds we grew up with in our countryside may soon attract the attentions of birders because of their rarity value and not for being part of our local natural heritage. Lets just hope a thaw sets in sooner rather than later.
Posted by bob duckhouse at 08:11