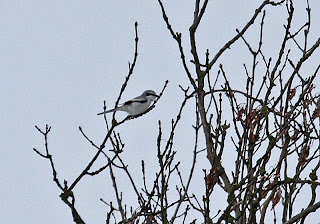 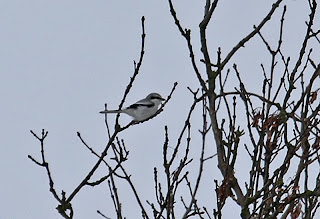 After bemoaning the lack of directions for the Great grey Shrike near Grandborough I was indebted to both Steve Haynes and Richard Mays for sending me very precise instructions on how to get there. Having dithered about yesterday I made a relatively early start with the threat of further snow showers later in the day. Met Richard, Dave and Colin on route who confirmed I was heading in the right direction. The lanes were drivable with care and I was soon parking up just as the snow got heavier. After a short walk I met up with Kevin and Jeff who showed me where the bird had been. They assured me the Shrike would pop up again on the wires when the snow eased off. The snow continued for another 15 minutes during which time a huge flock of Linnets entertained us with a formation flying exhibition. When the snow stopped the Great grey Shrike appeared on the wire as predicted. Quite distant but well worth the effort.
Posted by bob duckhouse at 07:22