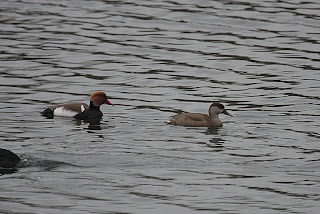 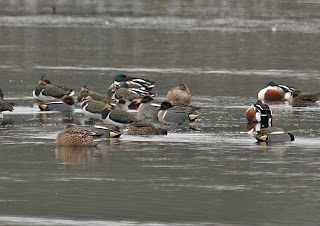 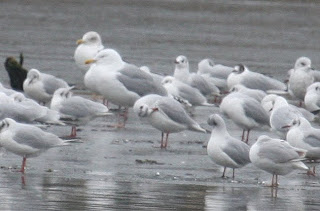 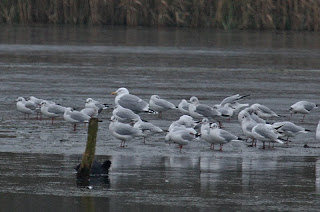 The day started slowly around Shustoke looking for Little Owl but with no success. I moved on to Coton where I met Alan Emery from South Derbys.who was eager to see the Smew. We went to the back pool and found one Redhead. Coton seemed a popular venue for local birders and we met Karl Sargeant amongst others who said hed just come from Kingsbury Water Park where he'd seen a pair of Red crested Pochard on Canal pool. Alan and I were soon on our way and it wasnt long before the pochards were in the bag. I was relieved to have caught up with them at last after the recent influx into the Midlands.
A message that there was a Green winged Teal at Brandon Marsh meant a quick farewell and a dash across to Coventry. I met up with Steve Cawthray and we made our to the Wright hide where the American Teal could be seen. Also of interest was a large gull which had been identified as a Yellow legged Gull. I tried to recall the comparison of the Yellow legged and Caspian I'd seen recently at Coton. Several features looked good for Caspian on the photos; bill shape, leg colour, small beady eye but I hadn't seen the bird in the scope and my images were distant and inconclusive. Feel free to offer your opinions.
Posted by bob duckhouse at 11:32